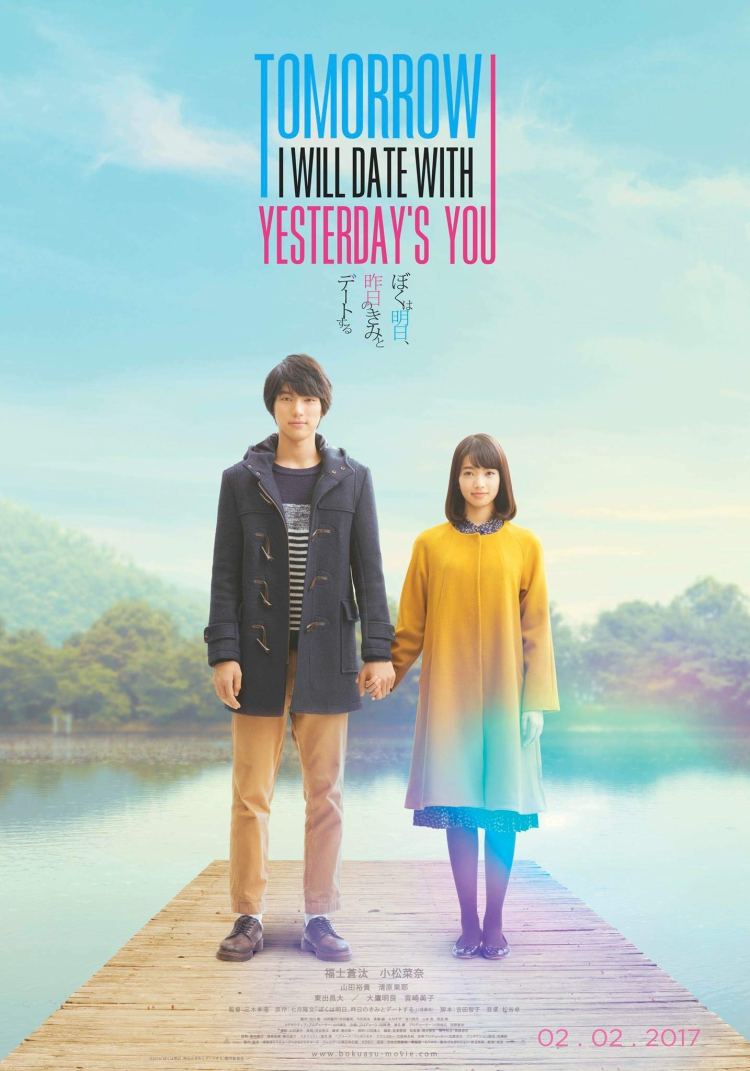 Like the Earth and the Moon, are lovers destined to move past and away from each other, sharing the same space only for a cosmic instant yet forever connected by the arc of their existences? It’s a heavier question than you’d expect from your average romantic melodrama. My Tomorrow, Your Yesterday (ぼくは明日、昨日のきみとデートする, Boku wa Asu, Kino no Kimi to Date Suru), another finely crafted tragic romance from genre master Takahiro Miki, is a kind of sci-fi “junai” in which the barriers to romantic fulfilment aren’t cultural or societal or medical, but cosmic in that our star-crossed lovers occupy opposing temporal realms which conspire against their union while also carving it into the arc of the spacetime continuum like a cruel existential joke.

At 20, art student Takatoshi (Sota Fukushi) spots the beautiful Emi (Nana Komatsu) on his morning commute. Hit by a thunderbolt, he falls for her instantly but is shy and diffident. Despite himself, Takatoshi decides that if she alights at the same station as him then it’s really meant to be and he can’t not at least try talking to her. Alight she does and he chases after her as best he can only for his cheerful attempt to ask for a phone number to be rebuffed by the ultimate excuse that she doesn’t have one. Surprisingly, Emi’s claim turns out to be the truth rather than an attempt to politely decline his attentions, though Takatoshi is surprised that his attempts at romance eventually provoke a few tears from the visibly moved Emi. The pair eventually start dating and are well into the world of young love when Emi reveals her secret – she is from a parallel universe where time runs in the opposite direction. Takatoshi’s future is her past, and her past his future. Their universes only overlap every five years for a maximum of 30 days and so this is their one and only shot at true love.

Miki begins in true romantic fashion as Takatoshi giddily pursues his first, idealised romance only latterly beginning to see signs of trouble on the horizon in Emi’s sometimes quirky behaviour and strange ability to predict the future. They walk through the usual steps towards becoming a committed couple, finally dropping the honourifics in  mutual recognition of their deepening bond, but every decisive step reduces Emi to tears in a fashion that runs beyond the merely cute or girlish. Takatoshi, young, naive, and in love, finds his mild suspicion vindicated when he discovers Emi’s diary which seems to run in reverse order and mainly contains entries for dates which have not yet happened.

Gradually, Takatoshi begins to realise that he and Emi exist on opposing planes, destined forever to orbit each other with only this brief moment of connection to sustain them. He muses on whether moving past each other is the natural path of a romance before learning to accept the transitory nature of love so that he might appreciate this brief gift he’s been given even in the knowledge that it will soon be over. Briefly petulant, he resents Emi’s dependence on the diary, filled as it is with “facts” from his 25-year-old self gleaned during a “previous” meeting, wondering if she is merely going through the motions of their predetermined romance and spoiling his vision of easy, serendipitous love in the process.

Privileging his own perspective, Takatoshi comes late to the realisation that Emi has been making a series of sacrifices on his behalf and that their strange romance is likely to prove much more painful for her than it will for him. Their relationship is built not on “shared” memories, but only in their brief moments of togetherness as they actively forge a present for themselves which is distinct from their two worlds of past and future. Like the diverging points which heralded their meeting, they are travelling in different directions – every first for him is a last for her as their moments of joy and pain become strange mirrors of their eventual heartbreak. Nevertheless, each eventually comes to the realisation that their love is worth enduring despite its inevitably sad end and that something of it is destined to remain even in the entropic melancholy of their love story. An old fashioned romance in every sense, My Tomorrow, Your Yesterday offers a surprisingly deep appreciation of true love anchored by mutual understanding and emotional equality even if it acknowledges that the world is cruel and that love is unlikely to survive as anything more than a bittersweet memory.