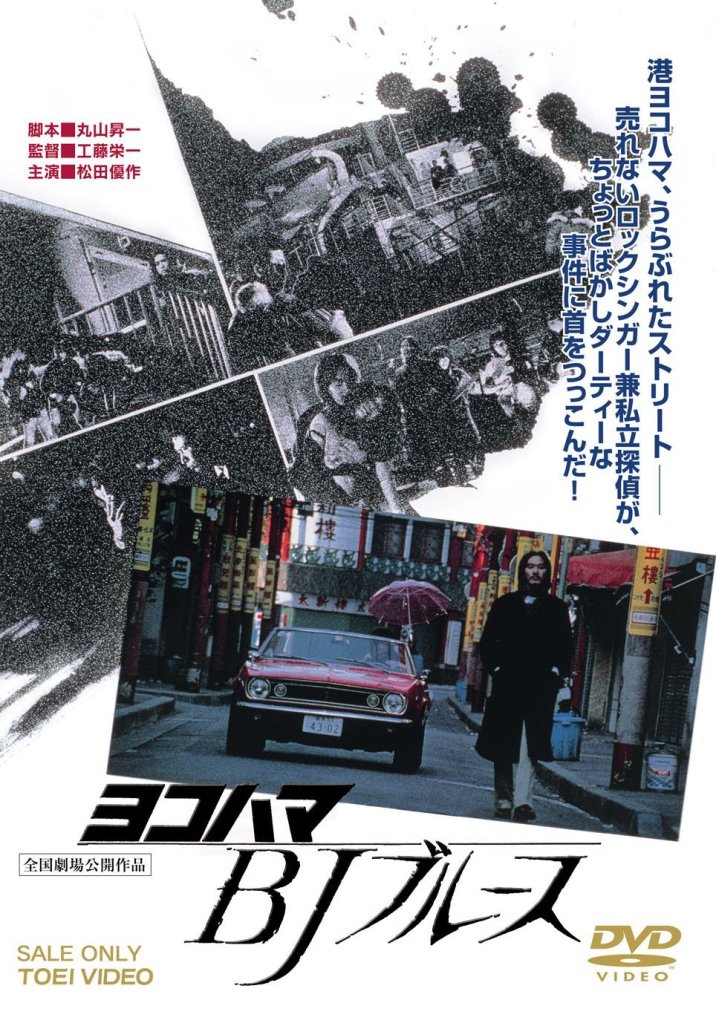 Yusaku Matsuda may have been the coolest action star of the ‘70s but by the end of the decade he was getting bored with his tough guy persona and looked to diversify his range a little further than his recent vehicles had allowed him. Matsuda had already embarked on a singing career some years before but in Eiichi Kudo’s Yokohama BJ Blues (ヨコハマBJブルース), he was finally allowed to display some of his musical talents on screen as a blues singer and ex-cop who makes ends meet through his work as a detective for hire.

After his set at a rundown jazz bar, BJ’s first job is tracking down a missing son. When he finds the guy, Akira, he seems to have become the employee (and possible sex slave?) of a gay gangster. Akira says he’s fine with his new life and wants his mother to leave him alone so BJ gets the hell out of there to give her the message but the unpleasantness of the situation lingers with him a little.

Shortly after, BJ receives a telephone call from an old police buddy, Ryo, who needs his help. Ryo got in too deep with the same gang BJ just came up against and is thinking of quitting the force in a bid to make the “Family” lose interest in him. However, Ryo is gunned down in broad daylight leaving his partner, Beniya, convinced that BJ is somehow responsible. BJ now doubly has it in for Family and starts working on his own behalf to try and find some answers and possibly a little vengeance too.

You see, back when Ryo and BJ were partners, they both liked the same girl, Tamiko, who eventually married Ryo. Beniya thinks BJ killed his friend to steal his wife and is much more interested in giving BJ a good kicking rather than investigating this very strange gang set up which seems to have some kind of drug smuggling gig going with the triads in Hong Kong.

BJ forms an odd sort of friendship with Akira in the hopes of tracking down the four gay, leather clad punk henchmen of Ali who probably gunned down his friend. However, the conspiracy only deepens and BJ finds himself suspecting even his closest of friends.

With its jazz soundtrack and melancholy tone, Yokohama BJ Blues is channelling hard boiled in a big way though does so in a distinctly modern fashion. BJ sings the blues whilst walking around this strange noir world which seems to endlessly disappoint him. Unfortunately for him, BJ is quite a good detective and quickly gets himself in way over his head only to end up finding out a few things it might be better not to know.

One of the film’s most notable components is its use of homoerotic themes with its gangs of gay gangsters, rent boys and punks. Indeed, though the wife of his former partner is floated as a possible motive, the love interest angle is never fully explored and all of BJ’s significant interactions in the film are with other men. Firstly his relationship with his former police partner Ryo which kick starts the entire adventure and then his strange almost date-like experience with Akira about half way through. BJ remains otherwise alone, a solo voice seeking justice for his fallen friends.

Of course, the film’s selling point is Matsuda’s singing so he’s allowed to play his own chorus in a sense by narrating the events from the stage in the form of the blues. Not quite “The Singing Detective”, but almost – BJ tries to bring some kind of order to his world by turning it into a song. In addition to adding to the noir tone, the bluesy soundtrack even allows for a New Orleans-esque musical funeral which oddly fits right in with the film’s weird, macabre atmosphere.

A surreal, noir inspired crime drama with musical elements, Yokohama BJ Blues is quite a hard film to categorise. Unusual for its homosexual milieu and overt homoerotic plotting the film occupies something of a unique place given its obvious marketing potential and star’s profile coupled with its decidedly murky noir tone. Difficult, yet interesting, Yokohama BJ Blues ultimately succeeds both as an intriguing crime drama and as a star vehicle for its versatile leading man.

This is a really, deeply, strange film.

I actually quite like Matsuda’s foray into the world of jazz, the title song from Yokohama BJ Blues which is heard in the trailer is called Brother’s Song and is included on Matsuda’s 1981 album Hardest Day. Here he is on a talk show singing Yokohama Honky Tonk Blues: