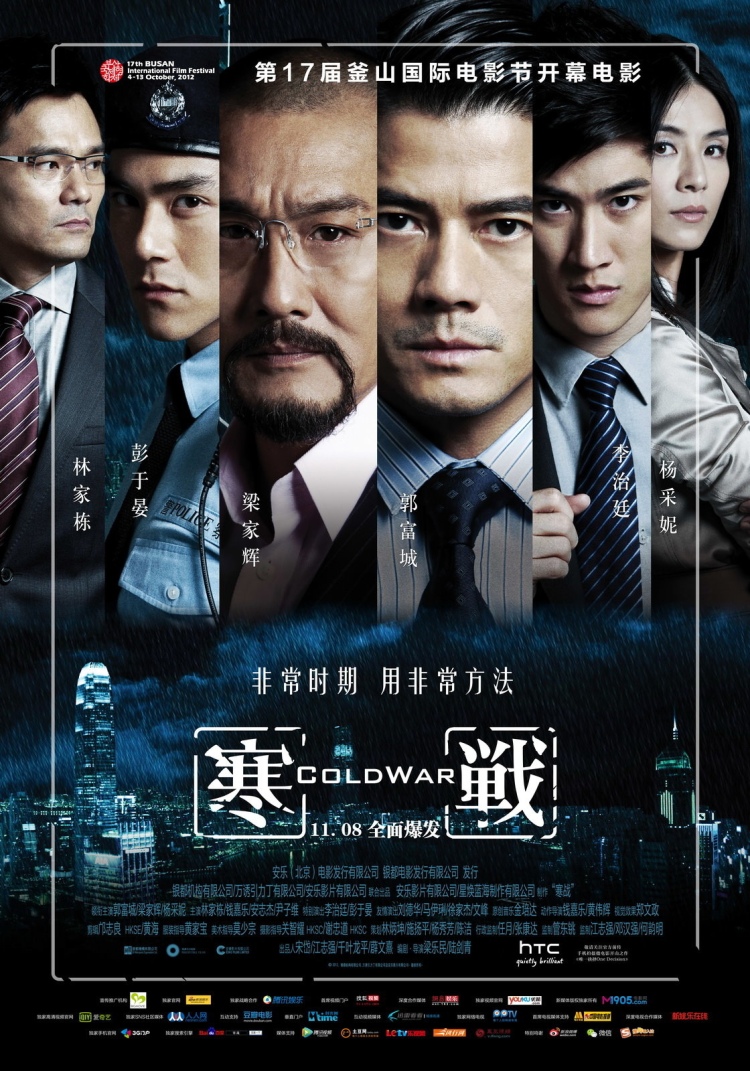 Reworked from a review first published by UK Anime Network in June 2013.

Listen up!  You’re going to have to pay attention to this review because there’s an awful lot going on this film. If there were a prize for most subplots squeezed into 102 minutes there wouldn’t even be room for any other candidates on the nominations list. If you like your HK action thrillers super complicated (if a little on the ridiculous side) and filled with some truly explosive (!) action sequences Cold War (寒戰) is definitely up your street.

Whilst a major explosion rocks a busy public area in Hong Kong, a crazed drunk hurtles through the streets before crashing his car into the central reservation in a quite spectacular manner. Apparently unharmed, he then rants at the traffic police that his uncle is a judge so they can’t touch him – a quick phone call seems to indicate he might be mistaken in his uncle’s feelings towards him but in any case the situation changes dramatically as the police are suddenly ambushed and kidnapped. The kidnappers then attempt to ransom the officers and equipment to the HK police authorities who are already a source of some press interest regarding possible corruption and general incompetence. It is imperative that they regain their men and capture the culprits as quickly as possible to avoid their reputation being even further damaged.

However, there is also considerable friction between the leading players at HQ and some uncertainty over who is favoured to become the new police chief – the young bureaucrat or the grizzled street veteran. This situation is further complicated by the fact that one of the missing patrolmen is the son of current section chief MB Lee (Tony Leung Ka-Fei). His subordinate, Sean Lau (Aaron Kwok), feels this makes him unsuitable to lead the current investigation and so seeks to have Lee removed from his post and take over the position himself. The pair also attract the attention of an officer at ICAC who’s convinced one or both of them must have more to do with the case than it seems, meaning each is effectively fighting a war on three fronts – firstly trying to rescue the police officers, then unmasking the perpetrators and finding out what they want with the HK Police force, and finally sorting out who’s up for the top job at police HQ whilst also keeping Internal Affairs off their backs.

No matter which way you put it Cold War is still extremely convoluted and fails to make all of its various plot elements hang together in a coherent way. It’s also unfortunate that the culprit is a little predictable (largely thanks to the actor’s mustache twirling performance) but when the final reveal does come it’s baffling in its pettiness, not to mention the total implausibility of such a complicated plan. Perhaps its unfair to criticise a film like this for having a problematic plot structure, perhaps fans of the action genre don’t look for finely crafted plotting as much as they look thrills and technically impressive action sequences – after all, we can’t all be Infernal Affairs.

It has to be said that Cold War does deliver in the action stakes with some extremely high production values which surpass even the heights of previous HK action films. From the opening car crash to the motorway car chase and explosive finale there are several simply jaw dropping moments throughout. When it comes to the big and brassy set pieces, Cold War is pretty much unrivaled but perhaps lacks the personal, intimate touch of other genre favourites. Tonally it walks a fine line between a sort of quirky humour and slightly absurd feeling where you can’t be sure whether you’re actually watching a comedy or not – some viewers may find all this a little too silly but others may revel in its ironic tone.

Cold War is certainly a flawed film, a little ridiculous but nevertheless enjoyable. It seems as if it also wants to make serious points about the justice system, media and police force but ends up pulling all its punches. If you stop to think about any of the plot, it makes very little sense but if you can let that go and just enjoy the superb action sequences and great performances from the leads Cold War is definitely one of the more impressive action thrillers to come out of HK in recent years.

Follow Windows on Worlds on WordPress.com
Join 328 other followers