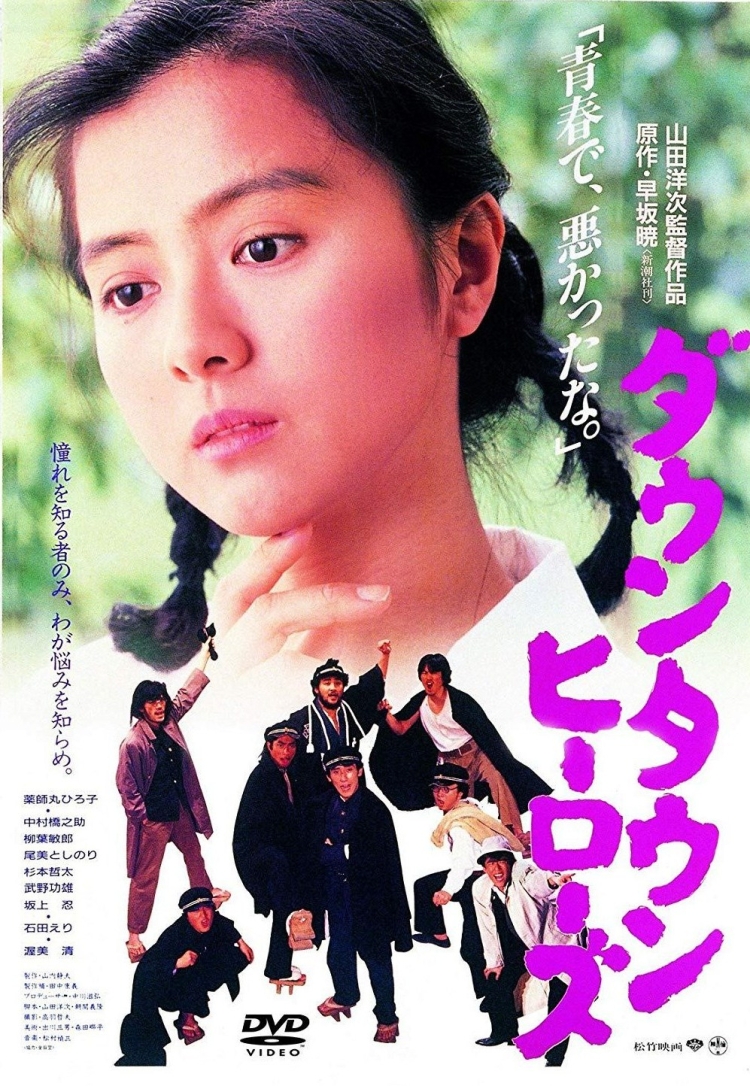 Unlike many of his contemporaries, Yoji Yamada was an infrequent visitor to the youth movie. Best remembered for his long running Tora-san series, Yamada’s later output is marked by an alternation of laughter and tears, running between raucous family comedies and poignant examinations of wartime loss. Set in the immediate postwar period, 1988’s Downtown Heroes (ダウンタウンヒーローズ, AKA Hope and Pain) adapts the autobiographical novel by Akira Hayasaka for a twin tale of endings and beginnings as a group of boys prepare to leave the Japan of their childhood behind and set out into the brand-new post-war future.

Our narrator for the tale is Hayasaka’s stand-in, Kosuke (Hashinosuke Nakamura), a sensitive young man from the mountains studying at the prestigious boys’ boarding school in town. The Matsuyama high school is one of the last to still be operating in Japan’s pre-war educational model. In fact, when the boys graduate the school will shut down in favour of the American 6-3-3 standard model of organising the educational system. Nevertheless, Kosuke and his friends enjoy what seems like a fantastically broad curriculum to modern eyes, much of which consists of classic German literature. Rather than their family names, the boys refer to each other with a series of nicknames inspired by their studies and have been heavily influenced by European left-wing political ideology. Accordingly, they are less than happy about the imposed American “reforms” and, paradoxically, the restrictions placed on their individual “freedom” by the “imperialist” occupation.

The central drama revolves around two episodes occurring one after another during the final year of high school. The first involves Kosuke’s friend Arles (Toshinori Omi) and a prostitute he helps to rescue from the red light district – Sakiko (Eri Ishida) was supposed to elope with a student from the school, but he didn’t show up and if the people from the brothel she was sold to find her she’ll be in big trouble. Her suitor turns out to be a fraud, but the boys are committed to saving her and hide Sakiko in their dorm, sharing their meagre rations with her before helping her escape to her home town. Meanwhile, the boys are also preparing for the very last culture festival the school will ever see at which they will present their adaptation of a classic German play. The snag is, the play needs a girl. Eventually the gang enlist the help of Fusako (Hiroko Yakushimaru) – a student at the girls’ school recently repatriated from Manchuria who also happens to be the young lady Kosuke had a meet cute with on the road and has been in love with ever since. Trouble brews when Gan (Tetta Sugimoto), the play’s director, falls in love with her too.

Told from the POV both of the old and the young Kosuke, the atmosphere is one of intense melancholy and inescapable nostalgia. Though these were times of hardship – rationing is fierce and intense, so much so that the school no longer serves meals at all on Sundays and the boys largely subsist on rice gruel, they were also times of joy and possibility. These are however youngsters in the best tradition of the sensitive young men of Japanese literature. They feel everything deeply, fully aware that they are living on the cusp of something new, which necessarily also means to be standing atop a grave. Their world is collapsing and the values they’ve been given (progressive though they seem to be) are about to be thrown out of the window. They have been taught that nothing is more important than their personal autonomy and that personal freedom is attained only through overcoming hardship, but their lives will increasingly be dictated by occupying forces and they feel themselves robbed of something without the right to reply.

Nevertheless their problems are also ordinary teenage ones of romantic crises and friendship dilemmas. Kosuke struggles with his love at first sight crush on Fusako but remains too diffident to say anything until it’s almost too late, while he also struggles to figure out what the most proper thing to do is when Gan reveals he is also in love with her. Gan, a sensitive writer, apparently burns with longing – so much so that he’s written a book long confession of love in apology for being unable to declare himself in person. Kosuke, a good friend, agrees to deliver the letter but both of them have neglected to consider Fusakao’s feelings so bound up are they in their own solipsistic dramas. Fusako was also struck by the love bug on her first meeting with Kosuke and has been patiently waiting for him to say something (as is the custom of the time). She is therefore doubly hurt and offended when he delivers a mini-tome on the theme of love from someone else before attempting to leave abruptly in a huff. Truth be told, there are few women who would enjoy being handed a thesis as a confession, but Fusako is really not in the mood to read one now.

Ending on a melancholy epilogue in which the old Kosuke looks on at field of young men playing American football before some others in running shorts brush past him and a young couple enjoy an evening walk, Yamada embraces the mild sense of deflation that has been building since the beginning. Young love faded and the dreams of youth were destined to come to nothing – not quite a tragedy, or perhaps only one of the ordinary kind, but food for the regrets of age all the same. The times were hard, and then they got better but somehow they were never so happy again. A youth drama indeed.