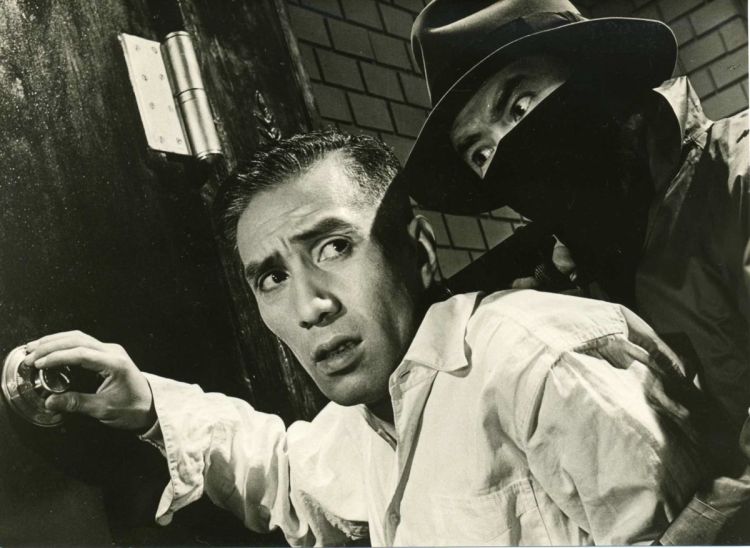 Social class as a means of social control is rarely dealt with overtly in Japanese cinema, but it’s been there all along from the feudal concerns of the jidaigeki to the inherent unfairness of the post-war world which made so many false promises to ambitious young go-getters, misselling dreams of social mobility in a newly meritocratic society. Koreyoshi Kurahara’s Intimidation (ある脅迫, Aru Kyohaku) is a noirish tale of blackmail and inexorable fall, but the title refers not just to the act literal act but to the oppression of a society in which the unscrupulous prosper and friendship, even love, is willingly sacrificed for the superficial comforts of wealth and status.

Bank manager Takita (Nobuo Kaneko) is riding high. He’s just been awarded an important new promotion but his success is less down to his innate talents, than to the fact he’s married the chairman’s daughter, Kumiko (Yoko Kosono). While Takita went to university and catapulted himself into the upper middle-classes, his childhood friend Nakaike (Ko Nishimura) only graduated middle school and has been working hard as a clerk in the same bank ever since. To make matters worse, Kumiko was once Nakaike’s sweetheart and Takita the lover of Nakaike’s sister, Yukie (Mari Shiraki). Where Nakaike is meek and earnest, Takita has abused every privilege he’s been given – illegal loans, backhanders, dodgy business deals and even an affair or two have left him wide open to blackmail. Takita’s party is about to end – Kumaki (Kojiro Kusanagi), a Tokyo hood, has proof of Takita’s improprieties and he threatens to expose all if he doesn’t get a sizeable amount of cash. It’s money that Takita doesn’t have, but Kumaki has a plan – Takita needs to rob his own bank. After all, who would expect the bank manager to raid his own vault?

Takita’s rise is as much down to societal corruption as it is his own lack of moral integrity. He’s got on by the traditionally “corrupt” ways that society condones – i.e. a dynastic marriage. He may have worked hard to get into university and get a good job that would enable him to be the kind of match a middle-class father would seek to arrange for his daughter, but everything after that is as straightforward and inevitable as a pair of train tracks. Takita has made it – his father-in-law will take care of everything else, all he has to do is sit back and avoid making any catastrophic mistakes. Perhaps because of the oppressive simplicity of his life, Takita has a lot going on the side – the “playing with fire” that he jokes about in his affairs and illicit backdoor deals are perhaps his ways of bucking the system, laughing at if not quite biting the hand that feeds.

Meanwhile, mild-mannered Nakaike has been patiently muddling through waiting for a break that society just does not want to give him. Leaving school early (for circumstances which are never revealed but probably easy to guess) has defined his life prospects. Takita went to university, married Nakaike’s teenage sweetheart, and then became his boss – it isn’t fair, but it’s how things work. Not content with swiping Nakaike’s prospects, Takita continues to lord it over him, pretending to be “friends” like old times but belittling Nakaike behind his back and even continuing to carry on with his sister Yukie who has never given up on the childhood sweetheart who threw her over for career opportunity. Nakaike is bound by the superficial rules of society and men like Takita laugh at him for it, they think he’s a fool who doesn’t understand how the system works and only exists as a mechanism for them to exploit.

When Takita gets Nakaike roaring drunk as a part of his nefarious plan, Nakaike admits that he always found Kumiko intimidating – he has a natural deference to and mild fear of her upper-class elegance. Takita has no such qualms – he wants into that club, and he doesn’t care what he has to do or who he has to step on to get there. Yukie blames her brother for their present situation. She thinks his meekness makes him an obvious doormat, that if he had any kind of spine he wouldn’t have let Takita walk all over him and marry Kumiko which would mean she wouldn’t be trapped in the never-ending torment that is being Takita’s mistress rather than his wife. Playing lady Macbeth she needles and provokes her brother, though even if he should snap there’s not a lot that he could do.

Kurahara begins with the passage of a train and later ends on the same image. Our two protagonists are each railroaded towards their fates even if they think they can make a break for pursuing their own destinies. They both think they’ve won, got ahead of the other and the various things which chased them, beaten the intimidation of the society in which they live which attempts to “railroad” them onto a set of pre-ordained courses, but all each of them do is lose. The train rolls silently onward, there is no point of disembarkation save that which it allows, and its conductors are everywhere.