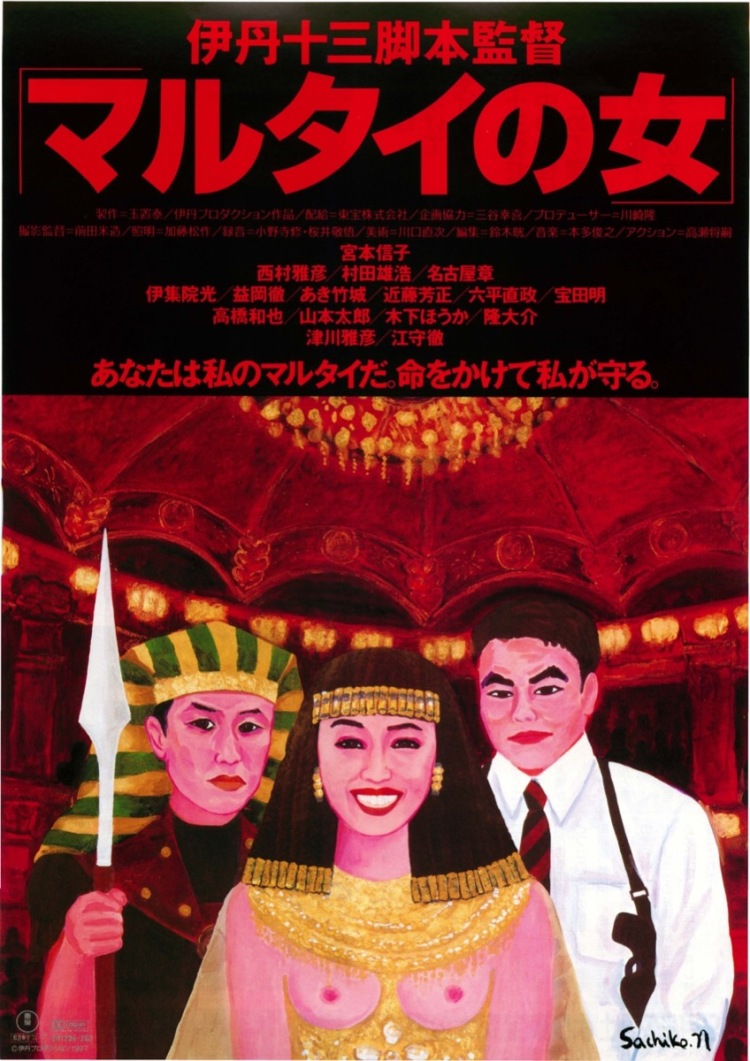 Juzo Itami’s fearless taste for sending up the contradictions and hypocrisies of his home nation knew no bounds, eventually bringing him into conflict with the very forces he assumed so secure it was safe to mock – his 1992 film Minbo led to brutal attack by a gang of yakuza unhappy with how his film portrayed the world of organised crime. Woman in Witness Protection (マルタイの女, Marutai no Onna), continuing the “Woman” theme from previous hits A Taxing Woman and the more recent Supermarket Woman, would be Itami’s final feature as he died in mysterious circumstances not long after its completion and like Minbo it touched an open nerve. In 1997, crazy cult violence was perhaps no laughing matter nor as ridiculous as it might have seemed a few years earlier, yet Itami makes the actions of brainwashed conspirators the primary motivator of a self-centred actress’ gradual progress towards accepting the very thing his previous films might have satirised – her civic duty as a Japanese woman.

Itami breaks the film into a series of vignettes bookended by title cards beginning with the first which introduces us to our leading lady – Biwako Isono (Nobuko Miyamoto). Biwako is currently in rehearsals for an avant-garde play about giving birth (“a woman’s moment of glory”) during which she reduces her assistant to tears prompting her resignation, decrying Biwako’s self-centred bitchiness as she goes. Chastened, Biwako spends the evening doing vocal exercises outside her apartment which is how she comes to witness the botched murder of a lawyer by a crazed cultist (Kazuya Takahashi) during which she is almost murdered herself and only survives because the killer’s gun jams. As the only witness Biwako suddenly becomes important to the police which works well with her general need for attention but less so with her loathing for hassle. Seeing as Biwako is a famous actress, her involvement also precipitates increased press interest for the murder and accidentally threatens the ongoing police investigation not least because Biwako likes to play up for the camera and isn’t quite sure how best to deal with her divided responsibilities. With the killer still at large, the police decide to give Biwako protection in the form of two detectives – Chikamatsu (Yuji Murata), a cultured man who’s a big fan of Biwako’s stage career, and Tachibana (Masahiko Nishimura), a rather stiff gentleman who never watches films and rarely indulges in entertainment.

Bringing up cult violence in 1997 just two years after Japan’s only real terrorist incident perpetrated by a crazed cult, might be thought taboo but taboo was not something that Itami had ever run away from. Crazed cults had also popped up during A Taxing Woman’s Return though back then they mostly represented the hypocrisy of the new yakuza as a front for organised crime that thought nothing of bleeding vulnerable people dry while feeding them a lot of semi-religious claptrap to make them feel a part of something bigger while the bubble economy continued its puffed up attempts to make them feel inadequate. This time around our cultists are less well drawn but clearly a collection of unlucky people duped into believing the strange philosophies of the “Sheep of Truth” which teach that the world can only be saved by its followers dividing the world into white sheep and black sheep. Like the policeman and later Biwako, the killer believes he is only doing “that which must be done” in the best interests of the world. He is unaware of the cult’s shadiness and shocked when their lawyer threatens his family in an effort to convince him not to talk once the police have managed to break his programming, ironically through exactly the same methods – manipulating his feelings towards his wife and son.

The cult is however merely background to Biwako’s ongoing character drama. Despite experiencing emotional trauma from witnessing a murder and then being threatened herself, Biwako enjoys being the centre of the attention with the police as well as the warm glow she feels in being able to help them with their enquiries, but balks at the additional hassle of having to be involved in the trial (even if she would be given quite a sizeable platform as a witness in a high profile court case). She resents having the two policemen follow her around – especially as she has quite a busy schedule which includes an affair with her married manager. Nevertheless she gradually allows them into her life with Tachibana even making his stage debut as spear carrier in a production of Anthony and Cleopatra. Tachibana’s steadfast defence of her person even at the risk of his own life begins to teach Biwako a few things about civic responsibility and the importance of duty, even if her final moment of realisation is another of her staged set pieces in which she conjures a poignant monologue from the accidentally profound mutterings of Tachibana, a little of Cleopatra, and the earlier line from the maternity play repurposed as she affirms that testifying against the cultists will be her “moment of glory”.

Rather than end on Biwako’s sudden moment of enlightenment, Itami cuts to an ironic epilogue in which a police detective watching the movie we have just seen complains about its authenticity while emphasising that no one in protective custody has ever been attacked. A little tongue in cheek humour from Itami that is followed by the more usual disclaimer before the credits resume, but perhaps anticipating another dose of controversy from both law enforcement and cult devotees. Lighter in tone and noticeably less surreal than some of Itami’s earlier work, Woman in Witness Protection is the story of a vacuous actress learning the purpose of her stage as her particular brand of artifice meets that of the less innocently self-centred cultists head on and eventually becomes the best weapon against it.