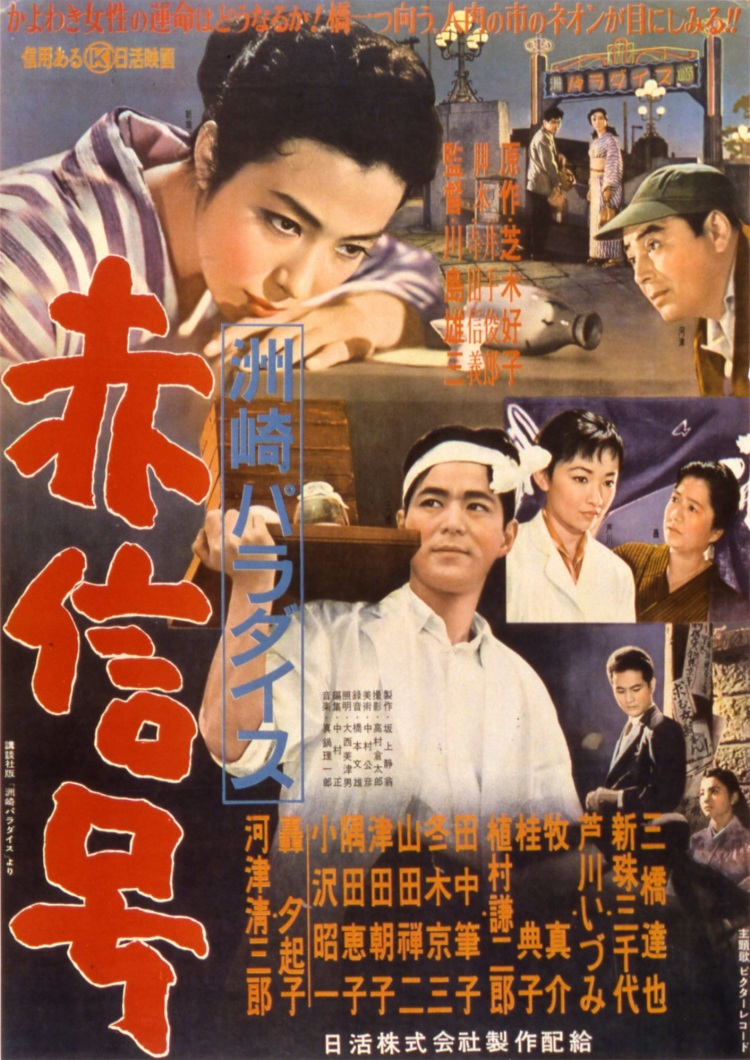 By 1956, things were beginning to look up. Post-war privation was receding into the distance with the consumerist future already on the horizon, but as much as there were possibilities for some others found themselves floundering, unable to find direction in a world of constant change. Yuzo Kawashima’s Suzaki Paradise: Red Light (洲崎パラダイス 赤信号, Susaki Paradise: Akashingo)* was released in the same year that the anti-prostitution law came into force forever changing the face of the red light district and like its heroes finds itself hovering on a precipice caught between an old world the new.

Lovers Tsutae (Michiyo Aratama) and Yoshiji (Tatsuya Mihashi) have found themselves at a crossroads, or more accurately on a bridge, unsure whether to go forward, or back, or some other place entirely. Tsutae is disappointed in Yoshiji, expecting him as the man to have some kind of plan, while he is a little resentful of her fortitude and tendency to take the lead. Yoshiji grows maudlin and moody, berating himself for his failure of manhood, a failing for which Tsutae has little sympathy. Fed up with him, she runs off and catches a bus. He chases her, and they both get off at Susaki, home to a famous red light district. Yoshiji isn’t happy with this development, worried that Tsutae will cross the bridge and fall back into her “old self”, perhaps hinting at the kind of life she lived before. Luckily for them, Tsutae spots a help wanted sign at a tiny bar firmly on this side of the river. The landlady, Otoku (Yukiko Todoroki), is a kind woman raising her two sons alone, but is wary of handing the job to a woman the like of Tsutae. As she tells her, no one stays here long, most just see it as a stepping stone, a place where they can acclimatise themselves to the idea of crossing the bridge into the ironically named “Susaki Paradise”.

Once you cross the bridge, most seem to say, you never really cross back. Later we learn that Tsutae is from the other side of the water and seemingly forever trying to escape her past though mostly through trying to attach herself to a man she thinks can carry her out it. Yoshiji seems to be aware that Tsutae is a former sex worker and is desperate to prevent her returning to her previous occupation, worried that he’ll lose her if she does or perhaps just unfairly judgemental. Likewise, we learn that he lost his job through some kind of impropriety, perhaps committed trying to keep Tsutae with him. Each of them is in one way or another trapped by patriarchal social codes, Tsutae believing that the only way she can save herself is by finding the right man to save her, and Yoshiji increasingly resentful for not living up to the male ideal. He can’t keep his woman, can’t provide for or protect her, most pressingly he cannot find a job but is also proud, shamed by the idea of accepting low paid manual work. He feels belittled and humiliated and is embittered by it.

Tsutae meanwhile takes to Otoku’s bar like a duck to water, quickly bringing in a host of male custom while bonding with the cheerful owner of a radio shop in nearby electronics centre Kanda, Ochiai (Seizaburo Kawazu). Otoku manages to find a job for Yoshiji delivering soba noodles in a local restaurant which he decides to take despite his intense resentment and wounded male pride. Ironically enough, the name of the soba restaurant is “Damasare-ya” which sounds like “tricked”, explaining why he might be reluctant to take the job, but the biggest problem is that he can’t trust Tsutae and is always paranoid about her meeting men in the bar or deciding to cross the bridge in his absence. Eventually, Ochiai offers to make Tsutae his mistress and provide a flat for her in Kanda, leaving her with a choice – “love”, if that’s what it is, with the feckless and jealous Yoshiji, or perfectly pleasant yet transactional comfort with Ochiai. Yoshiji, meanwhile, attracts the attentions of an earnest waitress in the soba noodle restaurant (Izumi Ashikawa) who seems to support his attachment to Tsutae but is also rooting for him to get over himself and live an honest life of hard work by knuckling down at his new job.

Yet that post-war restlessness won’t seem to let either of them go. Once you fall, you fall and it may not be possible to climb back up, or at least not without the right person to help keep you from slipping back down. Otoku has managed to keep a steady hand on the tiller, apparently waiting, we’re told, for the return of her husband who ran off with a woman from the red light district four years previously. The red light district, like toxic masculinity, cuts both ways and you’ll pay a heavy price for crossing the bridge. “People had better live honestly” a middle-aged man avows after having apparently seen the error of his ways, but it’s easier said than done.

When their worlds come crashing down, Tsutae and Yoshiji find themselves right back where they started, hovering on the bridge. “We have to live until we die” Tsutae once said, dismissing any fears we might have had that the pair might jump, but their course is both set and not. Now chastened, Tsutae’s decision to take a step back is both a reflection on the failure of her Susaki experiment, and also perhaps a mild concession to patriarchal social norms as she actively assumes the submissive role, affirming that she will follow Yoshiji’s lead while he reassumes his masculinity by finally taking charge. No longer quite so liminal they move on, another pair of floating clouds, perhaps more at home with who they are and can never be, but with no clear destination in sight.

Currently streaming on Mubi as part of an ongoing Yuzo Kawashima retrospective.