In the mid-1950s, Nikkatsu released a series of incendiary youth films which gave rise to a small moral panic in the older generation. The “Sun Tribe” movies proved so controversial that Nikkatsu could only release three of them before bowing to public pressure while Toho and Daiei both managed to release one each, bringing the total up to five. Produced by Daiei, Kon Ichikawa’s contribution to the Sun Tribe phenomenon, Punishment Room (処刑の部屋, Shokei no Heya), adapted another novel by Crazed Fruit’s Shintaro Ishihara who had, it seems, managed to capture something of the nihilistic spirit of the age.

Among the darkest of the Sun Tribe tales, Punishment Room follows near sociopathic university student Katsumi (Hiroshi Kawaguchi) as he works out his frustration with his hangdog father Hanya (Seiji Miyaguchi) by kicking back against societal rigidity. Hanya is a bank clerk with some kind of stress-related stomach complaint for which he is forever taking medicine. One particular day, Katsumi and his friend Hideo (Shoji Umewaka) turn up to run some kind of scam on him, insisting that Hideo’s family are in dire straits because his dad’s working abroad and they don’t have money to make a payment on a loan. The boys want Hanya to buy the note of debt as security and lend them 30,000 yen, something which isn’t really allowed but he ends up taking out half of his own life savings to avoid embarrassing or being embarrassed by his own son in the workplace. The boys, however, were just trying to extort him and planning to use the money to host a college dance while making a little extra on the side.

At this point, most still seem to feel that Katsumi is a “nice kid”, while Hideo is a bad influence. His middle school best friend Ryoji more or less says as much, but no one really knows the extent to which Katsumi is already becoming a black hole of nihilistic fury. His ire is provoked during a college debate session at which he’s outtalked by smart female student Akiko (Ayako Wakao) and abruptly cut off by the bored professor (Nobuo Nakamura). Despite knowing that one of his buddies has a crush on her, Katsumi makes a point of picking Akiko up during the chaos of celebration after a sports game. Along with Hideo and another, more innocent student they nickname “Sonny”, Katsumi takes Akiko and her friend to a nearby drinking house, popping out to buy sleeping pills and eventually spiking their drinks while they use the bathroom, knocking Sonny out for good measure to stop him getting in the way. After dragging the barely conscious girls back to Hideo’s family home, they take one each and rape them. On waking Akiko is defiant, threatening to call the police but an unrepentant Katsumi insists that she won’t be believed. Not content with their humiliations, the guys even insist on taking the girls home by cab only to run out and leave them with the bill.

Katsumi is is equally unrepentant when someone sends his family a letter informing them of his conduct, admitting that the allegations are true but insisting that the women are complicit because they did not report him to the police. He even refers to Akiko, who has after a fashion fallen in love with him, as “sort of my girlfriend”. Hanya ironically blames his wife whom he has treated with nothing but contempt, giving his son a crash course in a inherited misogyny, but she turns the same logic of toxic masculinity back on him in pointing out that his own passivity is the major cause of his son’s resentful rebelliousness. If Katsumi is rebelling against something rather than just a sociopathic little punk, it is indeed the spinelessness he sees in his father, obliged to scrape and bow for a mere pittance as a “wage slave” of a cruelly conformist society.

An angry young man, Katsumi preemptively rejects the salaryman straightjacket by rebelling against conventional morality. “I do what I want” he insists, as if proving that he’s a free agent acting under force of will alone and beholden to no one. His efforts are however, futile. His amoral violence buys him nothing but the same in return. Denied a mechanism for dealing with emotion, contemptuous of hollow authority figures, and infinitely bored by a society they believe has nothing to offer them bar empty consumerism, post-war youth seeks escape but finds only nihilistic self-destruction, trapped in a perpetual Punishment Room with no exit in sight. 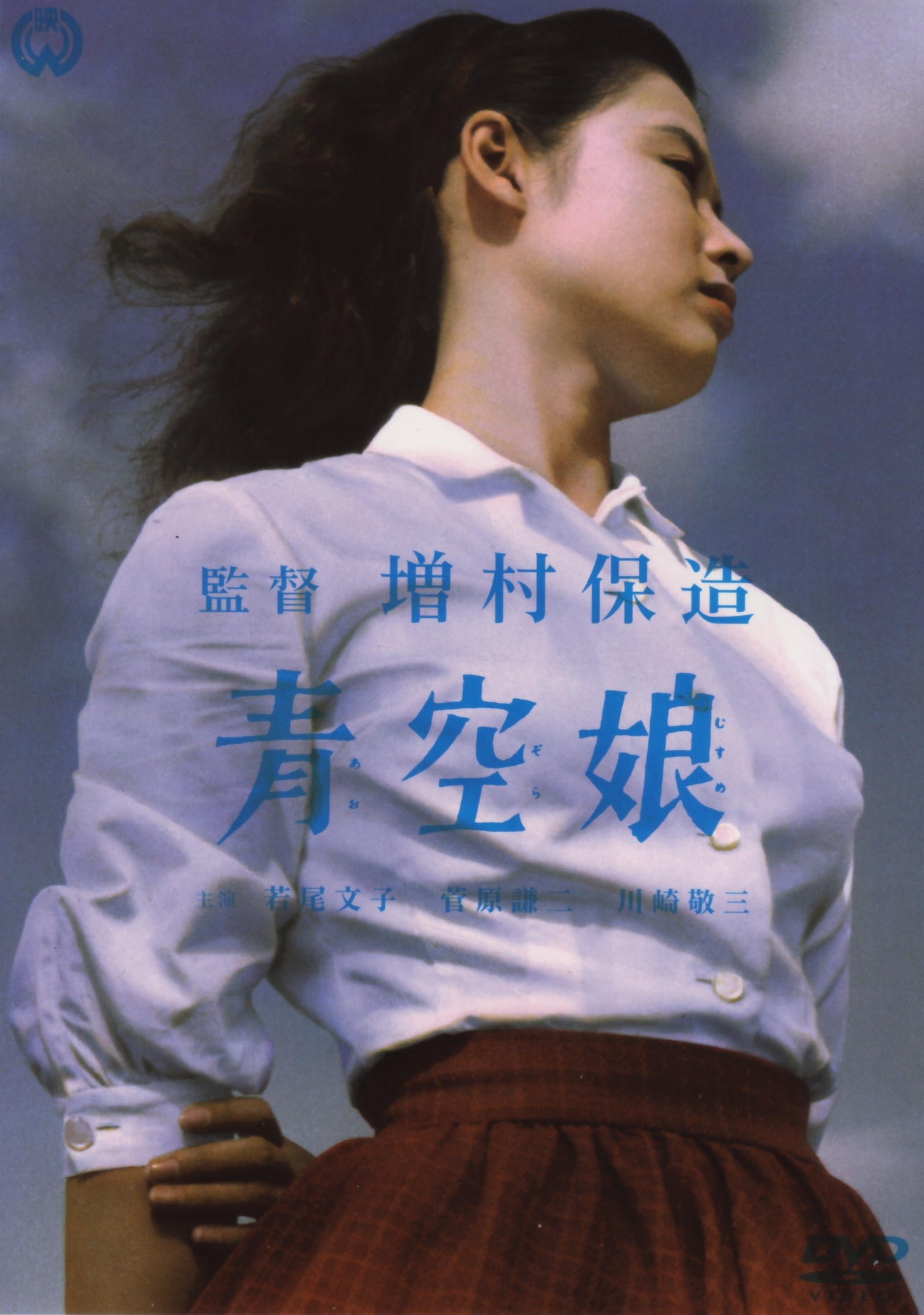 Yasuzo Masumura is generally remembered for dark, erotic and disturbing explorations of human behaviour but the early part of his career was marked by a more hopeful innocence and a less cynical yet still cutting humour. His debut, Kisses, was very much in the mould of the youth movie of the day but its themes were both more innocent and more controversial as a boy and girl bond after running into each other at the prison where both of their parents are serving time. Marked by darkness as it is, the worldview of Kisses is much kinder than Masumura would later allow as the pair of lovers seem to shake off their respective concerns to embrace the youthful joy and boundless freedom young love can offer.

The Blue Sky Maiden (青空娘, Aozora Musume), Masumura’s second film, does something similar but with added bite. Working for the first time with actress Ayako Wakao who would later become something of a muse, Masumura takes a typical melodrama storyline – the returned illegitimate child treated as a poor relation by her own “family”, and turns it into a genial comedy in which Wakao’s charming heroine shines brightly despite the often cruel and heartless treatment she receives. As far as the family drama goes, the genre was still in its heyday and the family unit itself fairly unquestioned yet as Masumura shows times were changing and perhaps the family is not the bedrock it initially seems to be.

18 year old Yuko (Ayako Wakao) stands at the gates of adulthood. Taking a last photo in school uniform with her high school friends as they prepare for graduation, Yuko expresses her nervousness about being sent to Tokyo to live with the family of a father she barely knows while her friends worry about getting married or getting stuck in their tiny village all alone respectively. Tragedy strikes when the girls’ teacher arrives on a bicycle and informs them that Yuko’s grandmother has been taken ill. On her death bed, the grandmother reveals the reason Yuko is the only one of her father’s four children to be raised in the country is not a concern for her health, but that she is illegitimate. Yuko’s father, unhappy in his marriage, fell in love with his secretary (Kuniko Miyake) who later gave birth to Yuko, but he was already married with two children and so Yuko’s mother went to Manchuria leaving her to be raised in secret in the country.

Having nowhere else to go, Yuko arrives at her father’s large Western style house to be greeted coldly by her half-siblings, and treated as a maid by her still angry step-mother while her father (Kinzo Shin) is away on business. It has to be said that this model middle class family are an extremely unpleasant bunch. Step-mother Tatsuko (Sadako Sawamura) is shrewish and embittered while oldest daughter Teruko (Noriko Hodaka) spends all her time chasing wealthy boyfriends (but failing to win them because she’s just as mean as her mother). The oldest brother (Yuji Shinagawa) idles away in a hipster jazz band while the youngest boy, Hiroshi (Yukihiko Iwatare), is rude and boisterous but later bonds with his new big sister when she is the only one to really bother interacting with him.

The Ono household has always been an unhappy one. Yuko’s father married his wife after being bamboozled into it by an overbearing boss trying to offload his difficult daughter. Feeling trapped and avoiding going home he fell in love with a kind woman at work, had an affair, and wanted to marry her but wasn’t strong enough to break off not only from his unwanted family but also from his career in pursuing personal happiness. By Masumura’s logic, it’s this failure to follow one’s heart which has poisoned the Ono family ruining not only the lives of Tatsuko and the children who have no respect for their father or capacity for real human feeling (as Yuko later tells them), but also that of Yuko’s poor mother  whose life has been one of constant suffering after being unfairly jettisoned by a man who was bold enough to have an affair, but not to defy social conventions and leave an unhappy home.

Yuko herself, however, refuses to allow her life to be ruined by the failings of others. Looking up at the bright blue sky with her teacher (Kenji Sugawara), she learns to create her own stretch of heaven if only in her own mind. Though others might have fought and complained at being forced into the role of maid in what is her own family home, Yuko bears her new circumstances with stoicism and good humour. Thanks to her kindness and enthusiasm, the family maid, Yae (Chocho Miyako), is quickly on her side and if Teruko’s latest target, Hirooka (Keizo Kawasaki) starts to prefer the “new servant girl” his defection is completely understandable. Unlike later Masumura heroines, Yuko’s “revenge” is total yet constructive. She refuses to be cowed by unkindness, remains pure hearted in the face of cruelty, and resolves to find her own happiness and encourage others to do the same. With a few cutting words offered kindly, Yuko gets to the heart of the Onos, essentially reminding her father that all of this unhappiness is his own fault – he made his bed 20 years ago, now he needs to lie it and be a full-time husband and father to the family of lonely misfits he created in the absence of love.

Light and bright and colourful, The Blue Sky Maiden is among Masumura’s more cheerful films, not least because it does seem to believe that true happiness is possible. Yuko does not so much defy social convention as ignore it. She lives openly and without rancour or regret. She takes things as she finds them and people (aside from the Onos) are good to her because she is good to them. Though Masumura’s later work would become increasingly dark and melancholy, Yuko bears out many of his most central themes in her steadfast claim to her own individuality and equally steadfast commitment to enabling the happiness of others in defiance of prevailing social codes.