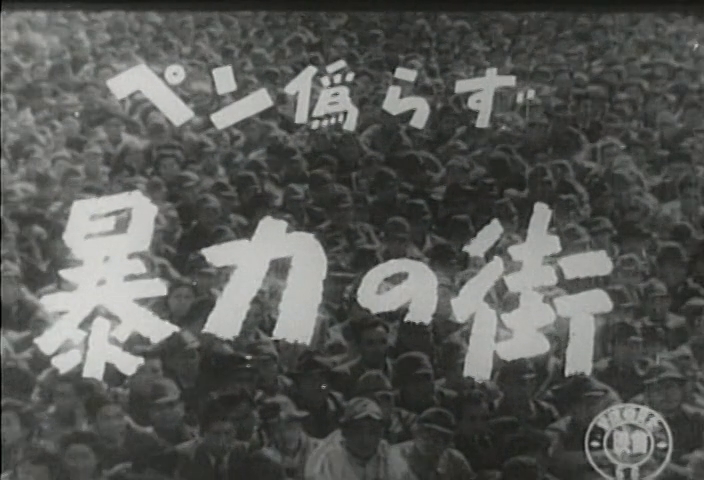 The immediate post-war era was one marked by fear and anxiety. The world had turned upside down, food was scarce, and desperation had provoked a widespread moral decline which rendered compassion a luxury many thought they could ill afford. Yet, in hitting rock bottom there was also the opportunity to rebuild the world better than it had been before. Street of Violence: The Pen Never Lies (ペン偽らず 暴力の街, Pen Itsuwarazu Boryoku no Machi), is one of many pro-democracy films arriving in the wake of Japan’s new constitution and makes an unlikely hero of the local newspaperman as the sole means of speaking truth to power in the fierce belief that the people have a right to know.

Tojo, a small town Northwest of Tokyo, was once the centre of the silk trade but as the industry declined, it gradually became home to gangs and a hub for wartime black market shenanigans. The sad truth is that the growing nouveau riche middle-classes profiting from post-war shadiness have more or less got the town sewn up. The corrupt police force is in cahoots with the gangsters who call themselves a “police support organisation” and make a point of wining and dining the local police chief, while also making sure the local paper is firmly in their pocket. The trouble starts when rookie reporter Kita (Yasumi Hara) is invited to a policeman’s ball and figures out the whole thing is sponsored by the silk traders’ union, which he thinks is not quite right. He takes what he’s learned back to his editor and is warned off the story but publishes something anyway, quickly becoming a target for prominent “politician” Onishi (Masao Mishima).

Street of Violence opens with onscreen text taken from the press code which emphasises that mass media has a duty to preserve the truth. Kita’s paper had been in league with the police and the gangsters enabling the atmosphere of casual violence which is gradually consuming the town. Kita, a new recruit, is not yet inured to the way things are and immediately thinks his duty is to blow a whistle, most obviously on the corrupt police force and judiciary. He is only allowed to do so because the previous editor stepped down and a similarly idealistic older gentleman (Takashi Shimura) from out of town has taken over. He decides to fight back, standing up to the crypto-fascist goons by continuing to publish the truth about the links between the police, black market silk traders, gangsters, and the rest of the local press who eventually gain the courage to join him.

Onishi continues to masquerade as a “legitimate businessman” and “respectable politician” claiming that he’s “striving for democracy” to help the “downtrodden”, but is also responsible for directly targeting Kita’s mother and sister in an attempt to intimidate him. The editor assigns another reporter, Kawasaki (Ryo Ikebe), to keep Kita safe and starts trying to find locals who will consent to be interviewed about gang intimidation while Kita’s friends from the Youth Association generate a kind of resistance movement holding protests and handing out flyers condemning the atmosphere of violence which has ordinary citizens turning off their lights and avoiding going out after dark to protect themselves from thuggery.

The silent cause of all this strife is of course post-war privation which has made the blackmarket the only means of survival for those otherwise starving but has also given free rein to selfish immorality. The Onishis of the world, the spineless police chief, and the cynical local press, have all abnegated their human responsibilities in wilfully taking advantage of a bad situation to further their own cause. When the press chooses not to turn a blind eye to entrenched corruption, it raises a flag that ordinary people can follow. Too intimidated to speak out, the townspeople had been living in fear but post-war youth has the courage to say no and demand a better future. A mass rally crying out “democracy” and insisting on an end to the cronyism and the corrupt systems of pre-war feudalism produces a people power revolution that can’t be ignored, forcing Onishi into submission, and a clean out of corrupt law enforcement. But, the earnest voice over reminds us, the victory is only partial – violence still exists and will rise again when it thinks no one’s looking. The press, most of all, cannot afford to look away if “democracy” is to be maintained.