“No one can be happy without money” the villain of Seijun Suzuki’s Underworld Beauty (暗黒街の美女, Ankokugai no Bijo) claims, vainly trying to justify his actions. He may indeed have a point, but you can’t buy happiness through selfish immorality. A noirish tale of changing times, Underworld Beauty pits a noble hearted gangster on the road towards reform against his amoral bosses as he tries to ensure a better future for the sister of a friend whose life was irreparably changed through proximity to crime.

Miyamoto (Michitaro Mizushima) has just been released from three years in prison. His first stop is the sewers where he locates a loose brick he’d been using as a dead drop and retrieves a handgun and a small bag containing three diamonds stolen in the heist which got him sent away. Paying a visit to his old gang, Miyamoto makes it plain that he intends to keep the diamonds for himself so that he can sell them and give the money to Mihara (Toru Abe), the man who was crippled during the job and now lives an “honest” life running a small oden stall. To Miyamoto’s surprise, his boss, Oyane (Shinsuke Ashida), says OK and offers to set him up with a foreigner in Yokohama who is interested in buying blackmarket jewels. Unfortunately, the whole thing goes south in predictable fashion when a gang of masked heavies turns up to disrupt the deal. Mihara, who had come along with Miyamoto, swallows the diamonds and promptly falls off a nearby wall. He survives just long enough to tell the police that he “slipped” thanks to his unsteady legs, which makes his death “accidental” meaning he won’t have to undergo an autopsy. That’s both good and bad for the crooks. The cops won’t find the diamonds, but getting them back before the body is burned is going to be difficult.

Arita (Hiroshi Kondo), a sculptor of mannequins, finds himself perfectly primed to find a solution because he’s been dating Mihara’s little sister, Akiko (Mari Shiraki), who’d been working as a nude model. Mihara had talked to Miyamoto about his sister and his fears for her in the big city. Feeling his debt even more since his friend’s death, Miyamoto decides to save Akiko from the evils of city life, but finds himself fighting an uphill battle. Meanwhile, Akiko is smitten with the intellectual yet cold Arita, who may perhaps be more interested in her for access to her brother’s body than to her own.

The diamonds themselves become a kind of MacGuffin and symbol of amoral post-war greed. Having been away for three years, Miyamoto is the classically conflicted film noir hero, a noble yet compromised figure forced to operate in a murky moral universe that is at odds with his own sense of justice. That is perhaps why he tries so hard to “save” Akiko even if she resents his sometimes patronising paternalism that, well-meaning as it is, denies her the agency that is a mark of the age. Mihara warned his sister about hanging out with Arita, suspecting he was a no good guy likely to drag her further into the underworld which he had now escaped, but she sees him as “different” from the men around her, mistaking his coolness for sophistication rather than a possibly sociopathic superiority complex.

Yet it’s perhaps a sense of inferiority which sends him so crazy about the diamonds. A tortured artist slumming it in a mannequin factory, he resents the way he’s chosen to “sell” his art while superficially laughing at those who buy it. There is something quite perverse in the various ways he is “using” Akiko, literally commodifying her body and turning it into a lifeless object, a simulacrum of “real” womanhood sans voice or agency, all the while planning to use her in order to get his hands on the diamonds. Figuring out Arita may have mutilated her brother’s body in order to dig them out, she wonders if he ever really loved her at all. His sudden declarations of affection and an impromptu proposal only further convince her that what he wants is money. She hides the diamonds inside the breast of a half-baked mannequin, just about where the heart ought to be. Later we spot the poor thing dismembered and abandoned, a gaping hole in its chest as it floats ominously in the sewer, discarded in just the way a woman like Akiko might be if she’d let a man like Arita get his hands on the loot.

Kidnapped as leverage to force Miyamoto to hand the diamonds over, Akiko loses her fascination with underworld darkness in learning what the “yakuza code” really means. “What do you mean, the yakuza way?” She barks at Oyane, “it’s wrong to kill, you idiot!”. Literally steamed clean and making an ironic escape up a coal shoot, she edges towards a new dawn. “What a beautiful day!” She exclaims, declaring herself not bored in the least, freed from the false promises of the underworld and released from the diamonds’ corruption into the bright sunshine of a wide open future. 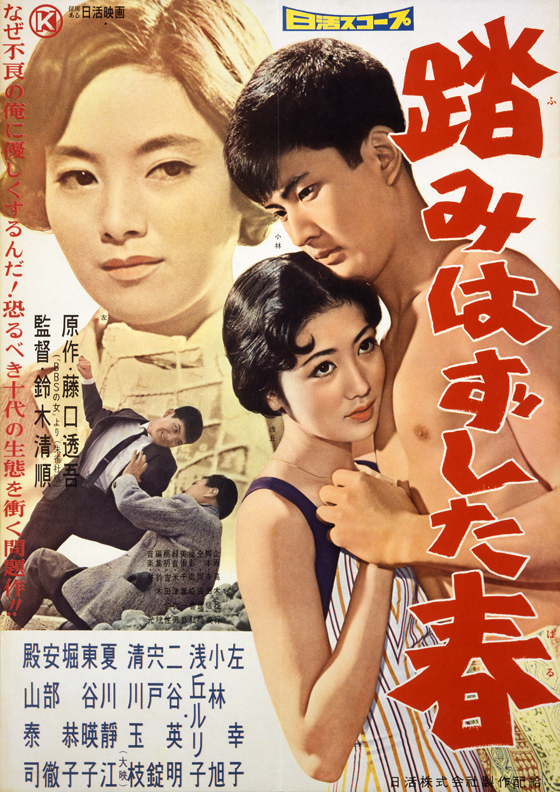 Seijun Suzuki may have been fired for making films that made no sense and no money, but he had to start somewhere before getting the opportunity to push the boat out. Suzuki’s early career was much like that of any low ranking director at Nikkatsu in that he was handed a number of program pictures often intended to push a pop song or starring one of the up and coming stars in the studio’s expanding youth output. The Boy Who Came Back (踏みはずした春, Fumihazushita Haru, AKA The Spring that Never Came) is among these early efforts and marks an early leading role for later pinup star Akira Kobayashi paired with his soon to be frequent leading lady, Ruriko Asaoka. A reform school tale, the film is a restrained affair for Suzuki who keeps the rage quelled for the most part while his hero struggles ever onward in a world which just won’t let him be.

Keiko (Sachiko Hidari) is a conductress on a tour bus, but she has aspirations towards doing good in the world and is also a member of the volunteer organisation, Big Brothers and Sisters. While the other girls are busy gossiping about one of their number who has just got engaged (but doesn’t look too happy about it), Keiko gets a message to call in to “BBS” and is excited to learn she’s earned her first assignment. Keiko will be mentoring Nobuo (Akira Kobayashi) – a young man getting out of reform school after his second offence (assault & battery + trying to throttle his father with a necktie, time added for plotting a mass escape). Nobuo, however, is an angry young man who’s done all this before, he’s not much interested in being reformed and just wants to be left alone to get back to being the cool as ice lone wolf that he’s convinced himself he really is.

Made to appeal to young men, The Boy Who Came Back has a strong social justice theme with Keiko’s well meaning desire to help held up as a public service even if her friends and family worry for her safety and think she’s wasting her time on a load of ne’er do wells. Apparently an extra-governmental organisation, BBS has no religious agenda but is committed to working with troubled young people to help them overcome their problems and reintegrate into society.

Reintegration is Nobuo’s biggest problem. He’s committed to going straight but he’s proud and unwilling to accept the help of others. He turns down Keiko’s offer to help him find work because he assumes it will be easy enough to find a job, but there are no jobs to be had in the economically straightened world of 1958 – one of the reasons Keiko’s mother thinks the BBS is pointless is because no matter how many you save there will always be more tempted by crime because of the “difficult times”. When he calms down and comes back, agreeing to an interview for work at his mother’s factory Nobuo leaves in a rage after an employee gives him a funny look. There are few jobs for young men, but there are none for “punks” who’ve been in juvie. Every time things are looking up for Nobuo, his delinquent past comes back to haunt him.

This is more literally true when an old enemy re-enters Nobuo’s life with the express intention of derailing it. His punk buddies don’t like it that he’s gone straight, and his arch rival is still after Nobuo’s girl, Kazue (Ruriko Asaoka). If Nobuo is going to get “reformed” he’ll have to solve the problem with Kajita (Jo Shishido) and his guys, but if he does it in the usual way, he’ll land up right in the slammer. Keiko’s dilemma is one of getting too involved or not involved enough – she needs to teach Nobuo to fix his self image issues (which are largely social issues too seeing as they relate to familial dysfunction – a violent father and emotionally distant mother creating an angry, fragile young man who thinks he’s worthless and no one will ever really love him) for himself, rather than try to fix them for him.

A typical program picture of the time, The Boy Who Came Back does not provide much scope for Suzuki’s rampant imagination, but it does feature his gift for unusual framing and editing techniques as well as his comparatively more liberal use of song and dance sequences in the (not quite so sleazy) bars and cabarets that Nobuo and his ilk frequent. Unlike many a Nikkatsu youth movie, The Boy Who Came Back has a happy ending as everyone, including the earnest Keiko, learns to sort out their various difficulties and walks cheerfully out into the suddenly brighter future with a much more certain footing.

The Boy Who Came Back is the first of five films included in Arrow’s Seijun Suzuki: The Early Years. Vol. 1 Seijun Rising: The Youth Movies box set.